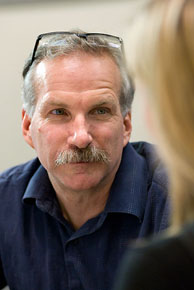 Gregg Mitman is the Vilas Research and William Coleman Professor of History of Science, Medical History, and Environmental Studies at the University of Wisconsin-Madison. His interests span the history of science, medicine, and the environment in the US and globally, and reflect a commitment to environmental and social justice. His recent works include Documenting the World: Film, Photography, and the Scientific Record (University of Chicago Press, 2016), Breathing Space: How Allergies Shape our Lives and Landscapes (Yale University Press, 2007), and Reel Nature: America’s Romance with Wildlife on Film, rev. ed. (University of Washington Press, 2009). Mitman is the founding director of the Nelson Institute’s Center for Culture, History, and Environment (CHE) at the University of Wisconsin-Madison, and is a past president of the American Society for Environmental History.
During the last decade, Mitman has increasingly focused on public humanities projects. In 2007, he created the Tales from Planet Earth film festival, which has brought together artists, academics and the public to explore the power of storytelling through film as a force of environmental and social change. Under his leadership, CHE, in collaboration with the RCC and Stockholm’s KTH Environmental Humanities Laboratory, hosted a 2014 experimental performance, The Anthropocene Slam: A Cabinet of Curiosities. Mitman’s current work is a multimedia project—film, book, and public history website—exploring the history and legacy of the Firestone Plantations Company in Liberia. He recently coproduced and codirected with Sarita Siegel, In the Shadow of Ebola, an intimate portrait of the Ebola outbreak in Liberia, and The Land Beneath Our Feet, a documentary on history, memory, and land rights in Liberia.

Forgotten Paths of Empire: Firestone and the Promise of Liberia
Email gmitman@med.wisc.edu